The application we’re going to be looking at is the popular, and highly exciting, game of rock-paper-scissors (RPS). It’s an interesting example to look at, as it’s simple enough to understand, while also involving some rich state evolution logic, as well the commit-reveal pattern that will likely be important in many state channel applications. To give you a quick idea of the app, here’s a bonus gif:

Alternatively you can have a go yourself here.

The first step in understanding at app like this is to understand the underlying states. A round of RPS contains 4 different states: 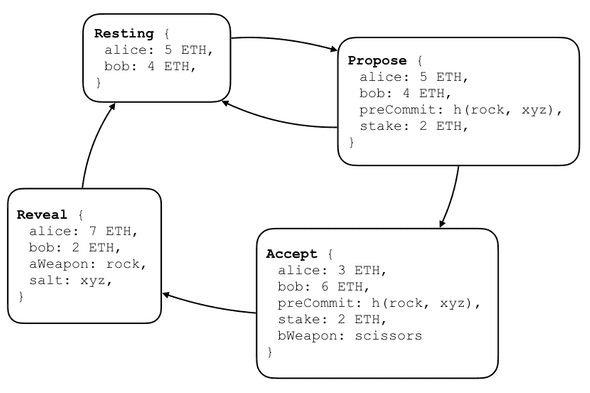 The game starts with both players in the Resting state. Alice then proposes a round by signing a Propose state, and sending it to Bob. The state includes the stake they will be playing for, and a pre-commitment to Alice’s choice of weapon (in this case ‘rock’). Bob then has a choice whether to decline the game by returning to the Resting state, or accept the game by signing the Accept state. If he accepts, he specifies his choice of weapon. The final step is for Alice to reveal her choice, and with it the winner, by signing the Reveal step. As you’ll see in the app definition contract section below, the transition rules at each stage ensure that the players play according to the rules (for example, the Accept -> Reveal step is only valid if the revealed move matches the pre-commitment, and so on).

We have to be a little bit careful with the incentives during the commit reveal stage, as if the state channel interaction breaks down (e.g. because one party stops responding), then the current outcome will be finalized on-chain. We therefore have to ensure that the outcome obtainable on-chain at each step doesn’t incentivize the party whose turn it is to stop playing.

The danger point in RPS is the reveal step. The moment Alice sends the Accept state, Bob knows whether or not he has won. We need to make sure that he is still incentivized to continue even if he has lost. The way we do this is set the outcome on the Accept state to be as though Bob has lost the round. This means that there is no advantage to Bob from stopping, so he might as well continue.

Once we’ve designed the underlying states and incentives, the next step is to encode the logic in a smart contract in a form that can be read by the state channel adjudicator. In order to do this, the contract must conform to the force-move app interface:

The eagle-eyed amongst you might have noticed that this is slightly different to the interface we discussed last week, when we had validTransition(State s1, State s2). The version you see above is a gas-optimized version, where we’ve stripped out some unimportant parts of the state, and de-duplicated the turnNum and nParticipants.

The first part of writing the application contract is to define the state format, along with a function to deserialize the appData bytes into this format:

Although not all states make use of all of the properties, we go for the simple approach here of including all properties in the struct, and leaving them empty when unused. We’re using solidity’s new, but no-longer-experimental, abi-encode functionality, which makes working with state channel states much nicer that before!

Finally, we define the validTransition function itself:

The full code here is fairly straighforward, but too long to go through line-by-line here. If you’re interested, check it out!

Working with a state channel wallet

Now that the app definition contract is sorted, the next task is to craft a web application capable of allowing users to run the state channel application. On the face of it, this seems quite involved. Here are some things that need to be covered:

Let’s focus on just the ‘signing states’ part above, to appreciate the challenge here. Signing data is a common part of basically every Ethereum application, and there’s a well established pattern for doing this: you send the data/transaction to your eth wallet (e.g. MetaMask), which prompts the user for permission, and then signs. It’s not hard to see that this isn’t going to be much use for state channels. The whole point of state channels is to be able to transact at speed, with multiple updates every second. This isn’t going to work if every signature has to be approved with a user-click. Moreover, without bespoke tools, it’s very hard for users to understand whether the chunk of data is safe for them to sign.

It seems that, in order to run state channel applications, the user needs a wallet capable of interpreting state channel states, to the extent where the wallet can auto-sign states on behalf of the user in certain situations. In the future regular Eth wallets will have these abilities, but for the time being we need a special state channel wallet to handle them. 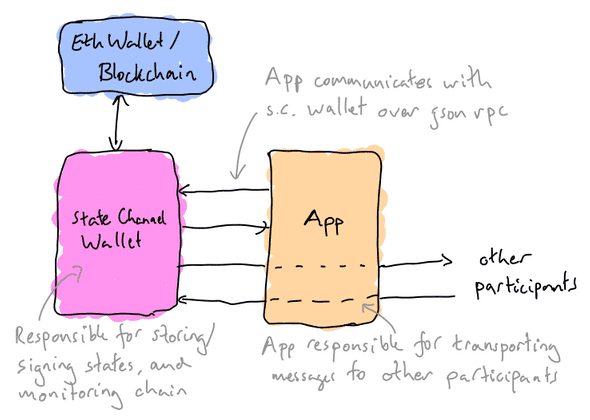 The app is responsible for relaying messages to the other participants in the channel. This gives the app developer flexibility, allowing them to pick a transport layer that meets the performance requirements for the application. This also opens up the possibility of including state channel states inside existing messages, for example as a custom header on an http request.

Even with the channel wallet managing signing, storing, and state channel protocols, we still need to be careful tracking the state channel’s state in the app itself. This makes sense: the channel wallet can only check whether states are a valid transition; it doesn’t know anything about the meaning of the app data, or how to construct new states from a given position.

A useful pattern seems to be to cache the current state of the state channel inside the application itself. It’s then very natural to design the application in state-machine style, based largely off the current state of the channel. For common applications such as payments, a bespoke ‘channel app client’ can be provided by the contract developers to remove this responsibility from the app developers and allow for a more ‘drop in solution’ dev experience.

The RPS app in this post is based around the following state machine. You’ll notice that we put a fair amount of effort into obscuring the underlying differences between the players that exists in the state diagram, to give a uniform playing experience for the players: 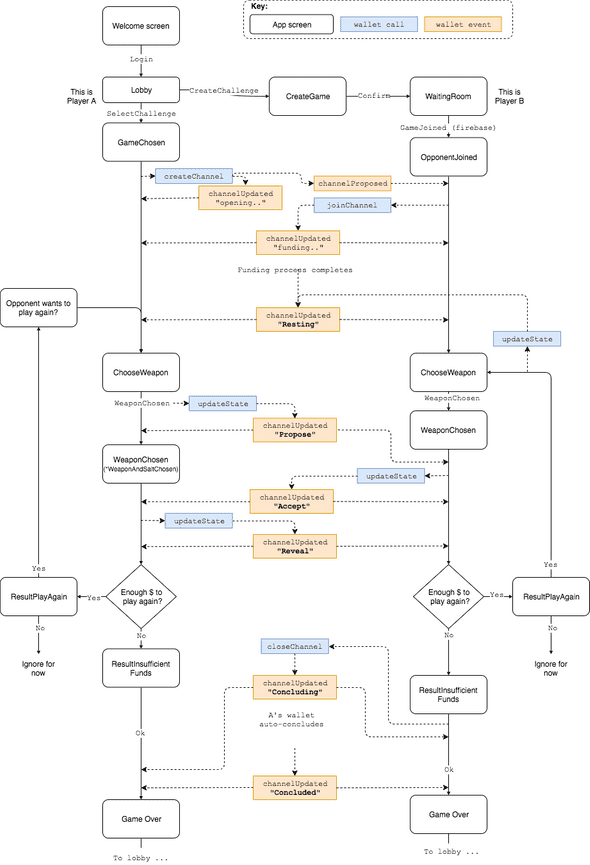 This diagram is pretty involved, but hopefully also fairly self-explanatory. You should get an idea of how an application developer interacts with a state channel wallet, and how to design an application that handles both user input and state channel updates triggered by an opponent.

In our next post, we’ll be returning to the core state channel protocol, looking at the optimized version of the adjudicator, and how we used a formal verification tool called TLA+ to find and fix security holes in the protocol layer. See you then!