Let’s design a trustless payment system for paid file torrenting. There are seeders and leechers. A leecher downloads small pieces of a file for a fee from many seeders. Using Ethereum mainnet transactions for payments is a non-starter. The mainnet Ethereum throughput is less than 50 transactions per second and the cost (at the time of publishing) is over $2 for the cheapest transfer. Optimistic and ZK Rollups increase throughput and decrease transaction costs. StarkEx ZK Rollup achieves a throughput of 3,000 transactions per second with a cost of $0.03 per transaction. If we assume that a leecher is willing to pay $1 for a 1 GB file and that a leecher downloads the file in 256 kB pieces, then the leecher makes around 5,000 payments. With an internet connection of 20 MB per second, the user makes 80 payments per second and each payment is $0.0002. Rollup throughput is insufficient for many leachers, and transaction costs are still much too high.

To meet these transaction throughput and cost demands, basic state channels are a good start. After a state channel is setup, individual incremental payments are free to make and throughput is only limited by the bandwidth of the communication channel between a leecher and a seeder and the hardware each uses. The challenge with a basic state channel is that a leecher needs to submit a mainnet transaction to set up a channel with each seeder it downloads from. A leecher has many short lived interactions with many seeders, so the channel setup cost is prohibitively expensive.

In general, virtual channels enable Alice to open a channel with Bob given any network topography where there is a path through intermediaries between Alice and Bob.

📚 A bit of background

In the various blockchain ecosystems, state channels are known as a way for a few participants to:

At statechannels.org, we have previously described the fundamentals of how to construct a channel, and how to fund one channel via another channel with a construction called ledger channels. These constructions have the limitation that channel participants must establish a direct relationship on-chain. In other words, if Alice and Bob have never interacted before and now would like to open a channel, Alice and Bob must sign an (off-chain) agreement and deposit funds into a contract.

For the paid torrenting scenario, Alice makes one mainnet transaction to establish a channel with intermediary Irene. She can then connect with any number of peers, “virtually”, as long as they also have a on-chain relationship with Irene. Once connected, she can stream payments in exchange for data.

Our protocol, called Nitro, enables the following use case:

Other protocols (such as Raiden) allow two participants to establish a channel via an intermediary with no new on-chain deposits. A well-established pattern is to use hashed timelocks to route a payment from Alice to Bob through the intermediary. The clear downside of this setup is that all payments must be routed through an intermediary.

This document is going to get deep into the weeds of how Nitro channels are funded. It has to to show you how trustless and secure virtual channels are possible!

A direct Nitro channel between Alice & Bob is funded by:

Outcomes are a structure that instruct the Adjudicator how to distribute funds when the channel is finalized (check out our latest update!). In Nitro, they are a prioritized list of (destination, amount) pairs:

This is a slight abuse of notation: we are assigning a priority to destinations based on the order of the keys in a dictionary. So, {B: 3, A: 7} would pay out to Bob first, then Alice. Think of this as an ordered dict a la Python 3.7+.

The diagram shows how Alice and Bob can withdraw tokens from a channel C with an outcome {A: 7, B: 3}. The on-chain adjudicator records that the channel has 10 tokens deposited. Alice or Bob register the channel outcome on-chain. With this outcome recorded, they can then withdraw their tokens, leading to Alice's EOA increasing by 7 tokens, and Bob's increasing by 3.

The destinations in the above outcomes are implicitly EOAs. But in Nitro, channels themselves can be destinations. This allows for one channel, L, to serve as a “private ledger”, as it enables peers to fund many sub-channels by depositing once into a single ledger channel. We avoid the need, delay, and cost of going back to layer 1! An example:

This is a very brief overview. For a more in depth discussion, please check out our blog post on the topic!

Below, we demonstrate a safe construction for creating a 3-party channel when 2 participants have no relationship on-chain. This construction, in addition to ledger funding, enables virtual channels. Our participants are Alice (A), Bob (B) and Irene the intermediary (I). 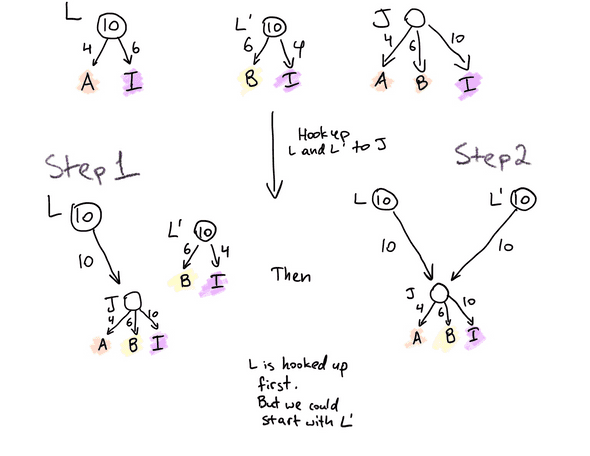 Our first attempt at connecting A, B, and I in a channel. Spoiler alert, not a trustless construction!

Steps 1 and 2: Ledger channels are switched to fund J.

Alice must take the following into consideration:

Let’s consider how J is defunded after step 2.

Nice! Everyone got what they deserved. But, let’s consider a scenario where Alice and Bob collude against Irene. Suppose step 1 takes place, but Bob refuses to participate in step 2. Then this may happen:

Notice that Bob received 6 tokens from J, even though none of his tokens are ever transferred to J. The net result is: Alice gets 4, Bob gets 6, and Irene gets nothing. Irene has been stiffed!

You might think that, if the order of the destinations in the outcome {A: 4, B: 6, I: 10} is switched around, then we can create a safe construction. Play around with the order, though, and you’ll see that there’s always someone who could lose out!

Guarantees to the rescue

Let’s introduce a new data structure. A guarantee is a type of outcome that specifies: 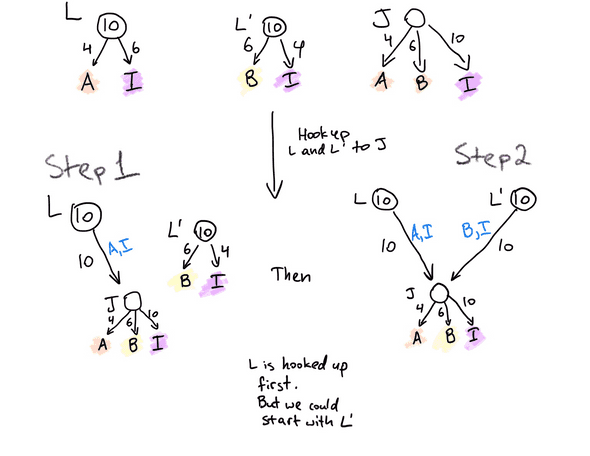 Our second attempt at connecting A, B, and I in a channel. This time, we have a trustless construction!

Let’s walk through how J is funded:

Steps 1 and 2: Ledger channels are switched to fund J. These can happen in any order.

Then claiming the guarantee in L’s outcome has three effects:

The purpose of the priorities, in this operation, is to tell the adjudicator to skip over the outcome item with destination B, so that Irene can get her portion of the funds originating from L. So, the adjudicator looks at the highest priority destination in the guarantee, which is A, and transfers 4 tokens to A, adjusting J’s outcome accordingly. Then, it looks at the next highest priority destination, which is I. In J’s outcome, Irene should get 10 tokens, but there are only 6 tokens left to be claimed. Thus, 6 tokens are sent to Irene, and J’s outcome is again updated accordingly.

Note that it’s important for the priorities to be [A, I] and not [I, A]. If they were [I, A], then Irene would get 10 tokens out of the claim operation, leaving Alice no way to get the 4 tokens that she deserves!

With the claim operation, Alice and Bob can no longer collude to cheat the Irene out of funds.

You might have noticed that for Alice to pull their funds out, 3 on-chain operations are required: outcomes of the joint channel and funding are registered on chain and claim is called. It is important to remember that this is a worst case scenario. Let’s say that Alice and Bob would like to close J after Bob has transferred 4 tokens to Alice. If Bob and Irene are cooperating, then:

The takeaway is that, in the collaborative case, Alice can use funds deposited to L to fund and defund many different application channels without any on-chain transaction.

In the previous section, we have established how to create a 3-party channel when two of the participants have no relationship on chain. A careful reader will note that any updates to J require a sign-off by the intermediary. At the beginning of this post, we set out to create a channel between A and B that is private. Fortunately, Nitro composability allows us to create a private application channel X funded by J. Below diagram shows the construction. You are armed with all the necessary concepts to understand this construction, but we welcome any and all questions! 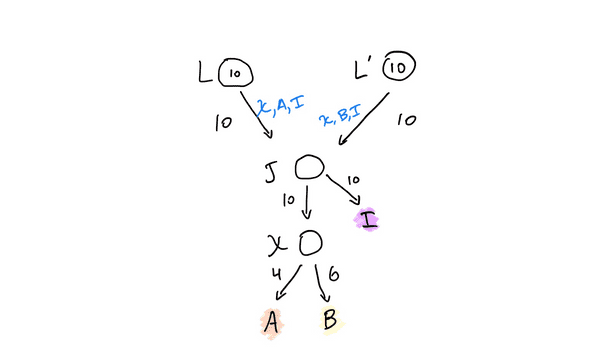 X is a virtual channel.

Another exciting, in-progress update to Nitro virtual channels is eliminating the need for joint channels. With this update, the ledger channels L and L' fund the application channel X.

Written by Mike Kerzhner and Andrew Stewart, thanks to Robert Drost, Joseph Chow, George Knee, and Colin Kennedy for feedback. This post is based on the Nitro Paper by Tom Close.